Analysts of the financial holding Robocash Group have mapped regional demand for online loans in the Philippines. The National Capital Region has been defined as a clear leader by the number of requests for online financing. In NCR, people use online lending services 5.3 times more often than on average in the country. Second place belongs to the Cordillera Administrative Region: the demand here is almost twice higher than the country’s average rate.

Based on the data of 1.52 millions of Filipinos who have used online lending services in 2019, the analysis has shown that urbanization facilitates online lending. The index of the capital region in the study is 5.34. It means that its predominantly young population distinguished for extensive usage of digital solutions and advanced consumption apply for online loans 5.3 times more often than on average in the country. It is confirmed by the fact that most of the customers live in highly urbanized Quezon, Makati, and Manila. Within the total number of users of online lending services in the Philippines, they hold 36.9%, 16.8% and 6.3%, respectively.

The least populous region CAR takes second place with a rate of 1.83. The analysts of the company explain it by a high interest in online financing facilities among customers from the regional centre Baguio. Holding almost 100% of customers in the region, its share on the country scale amounts to 3.1%. There is a similar situation in Central Visayas and Region XI. Thus, on the country level, the region Central Visayas has 5.7% with its center Cebu taking 5.3%. Then, Region XI holds 3.9% of customers in the country, while Davao residents take 3.8% on the same scale. 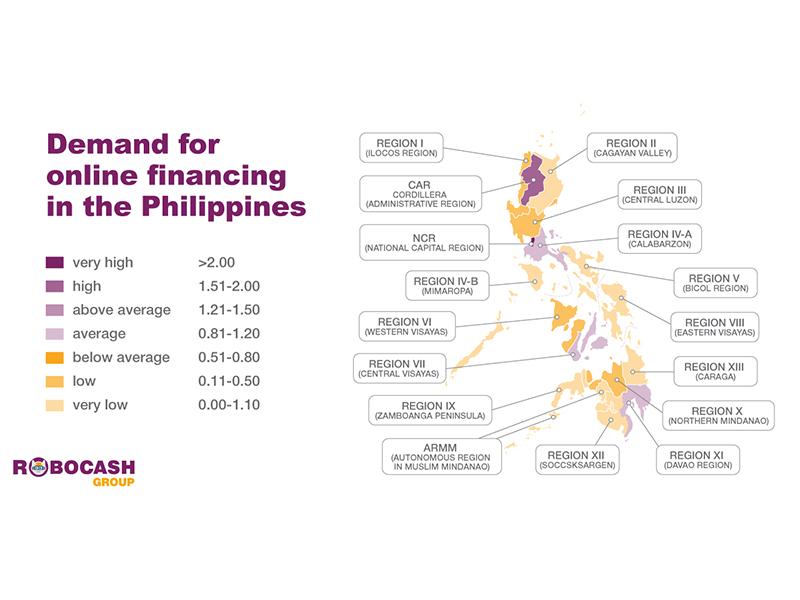 “The urbanization and proximity to the technologically developed capital are enhancing demand for Fintech solutions among Filipinos. There is immense untapped potential for further penetration of online solutions throughout the Philippines. Thus, despite high internet penetration of 71%, which is 14% higher than the global average rate, a lot of people remain underserved by banks. An increase in the number of customers of online services and growing usage of internet loans as an efficient financial tool will facilitate their gradual penetration across the whole country in 1-2 years,” — expect the analysts of Robocash Group.

FWD partners with Klook for customers in Southeast Asia